2 December 2016 — it was a sunny morning at the campus of Strathmore University in Nairobi, Kenya. The voices of students gathered in the student centre canteen echoed throughout the atrium, reaching all the way to the 4th and 5th floors, where @iLabAfrica is located and where our Internet of Things (IoT) workshop with Pycom was about to take place.

The workshop was part of the Nairobi Energy Data Challenge, a series of events hosted by the University of Edinburgh’s Energy Data for All initiative, which is investigating how data collected through pay-as-you-go and off-grid solar systems is collected, managed, understood and shared. The Challenge engaged with stakeholders and people interested in off-grid energy, pay-as-you-go technology, IoT and design through a brainstorming workshop and a hackathon-type event as well as the IoT workshop. The aim was to develop new ideas and opportunities to create value in the context of data and off-grid energy access, with a particular focus on end users.

The Energy Data for All initiative includes a focus on IoT because of its potential for applications in pay-as-you-go tech and off-grid energy services. As an emerging technology that could offer lower-cost, longer-range connectivity than current models, IoT has particular relevance for countries without highly developed wireless communication networks. However, experimentation and careful research is needed to identify where and how it has value and who it will create value for.

The vibrant and youthful tech scene in Nairobi is always on the alert for new technologies and ways to employ them. Numerous tech incubators, among them Strathmore’s @iLabAfrica, offer hackathons, trainings and other events as well as financial support to help young people develop and implement new ideas. Among these people is Leonard Mabele, a current Masters student at Strathmore, who approached iLab with the idea of starting an IoT lab. 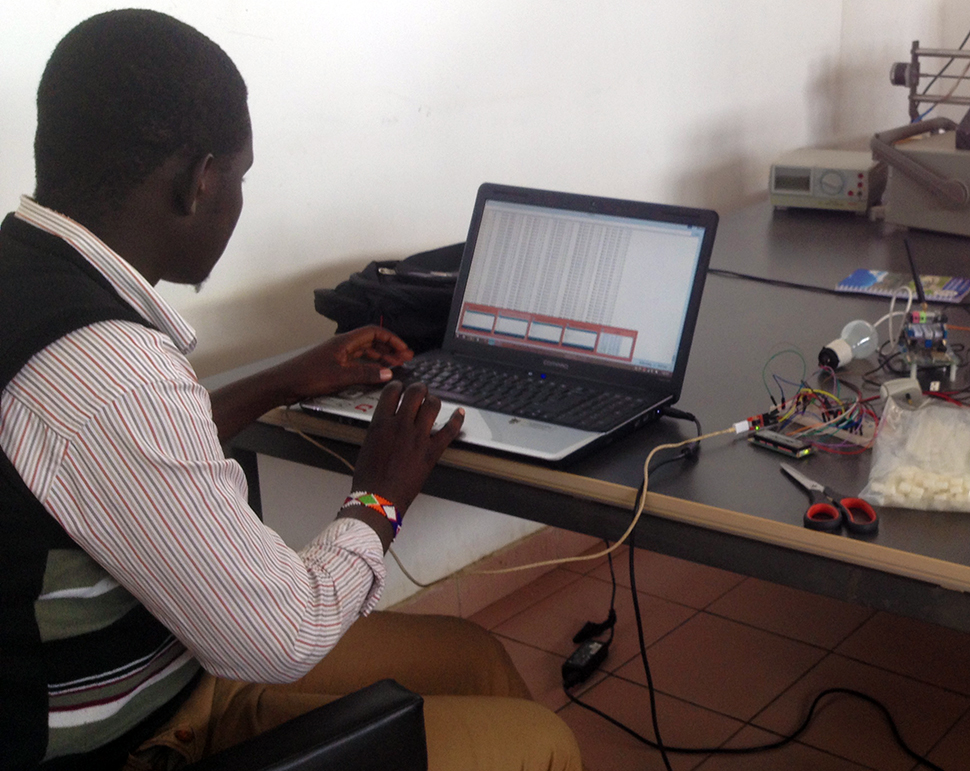 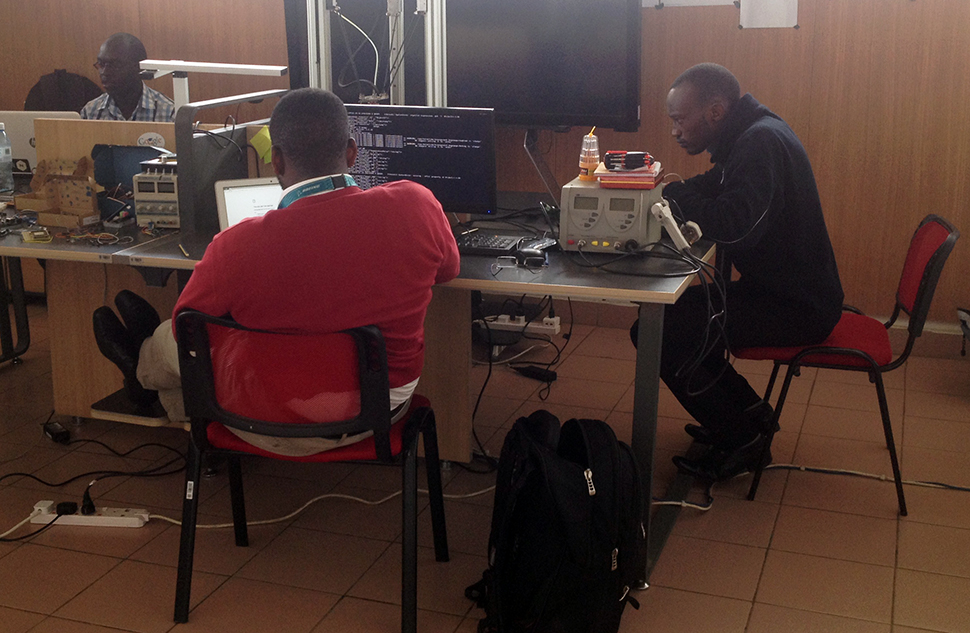 Combining the relevance of IoT to Energy Data for All, iLab’s space and logistical support, Leonard’s passion, and a connection with Pycom through the University of Edinbugh’s IoT network pilot, the IoT workshop was born.

Twenty-seven people attended the workshop, including students from different universities across the city; engineers, developers and IT analysts from established local companies, start-ups, social enterprises and consultancies; and an auto mechanic and self-taught programmer. They came for various reasons — interest, curiosity, and the desire to discover, learn and find new opportunities.

Roberto Marques from Pycom began the workshop by introducing the group to the basics of IoT and different communication networks. He then explained the details of LoRaWAN (low-range wide-area), which is one of three network protocols supported by the LoPy, one of Pycom’s multi-network communication boards. Roberto brought along ten LoPys and a collection of light sensors for participants to experiment with. 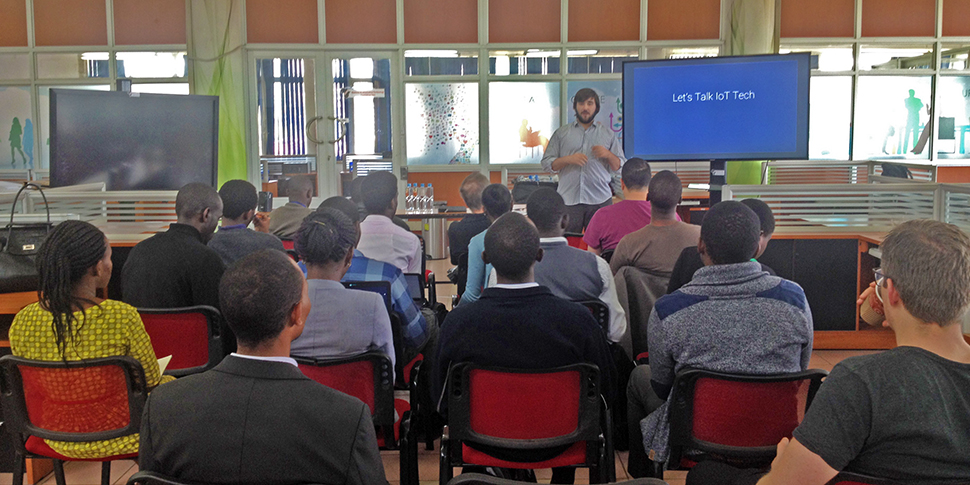 After the introduction, participants divided into groups of two to three and prepared to set up the LoPys. They downloaded the Pymakr IDE, then connected the LoRa antenna and, for those who were successful, after a short time began sending messages over the network. Roberto set up a LoPy as a nano-gateway to receive the messages, connected it to his computer and the screen and soon people were watching their messages come in. The skilled programmers immediately found ways to spam the network and had a little snicker as their messages rolled across the screen and Roberto searched the room to try to identify the source of the mischief. 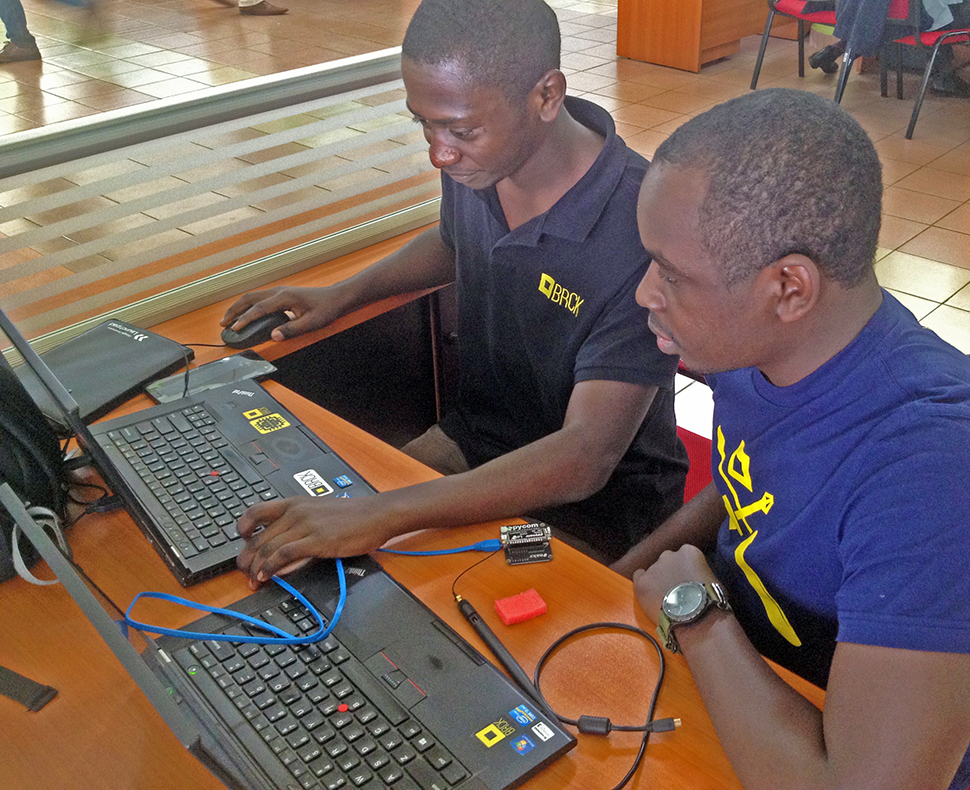 Participants had various reasons for coming to the workshop. One young man and a woman both worked at a company well-known in the city for its copying and printing services. Recognising the rapidly changing opportunities in Nairobi, the company had set up an innovation lab and was exploring business possibilities in IoT and sensors, among other things. The young man mentioned — perhaps with a slight note of envy — that one of his colleagues who was based in the innovation lab had recently participated in a hackathon where he and his team won the top prize of Ksh 100,000 (~ £775).

Another participant was about to complete his studies in Computer Science but was taking a break to earn the money he needed to finish. He found a job at an international company in the pay-as-you-go solar home system market. Although he is currently working as a salesman, his real interest is in the technology. Pay-as-you-go solar home systems employ various types of remote monitoring and control systems that allow the system to function only when the customer makes a daily payment. While these systems are lauded for providing energy to the rural poor at an affordable rate, he thinks they are still too expensive. He and his friends have been brainstorming different ways to make them much more affordable to a wider segment of the population. He sees definite possibilities in networks like LoRaWAN that allow data to be transmitted at a much lower cost than through GSM networks.

After lunch, everyone went back to the iLab to begin working on connecting light sensors to the LoPys. By the end of the afternoon, most groups had managed this successfully, and those that were still trying stayed on past the end of the scheduled time for the workshop. 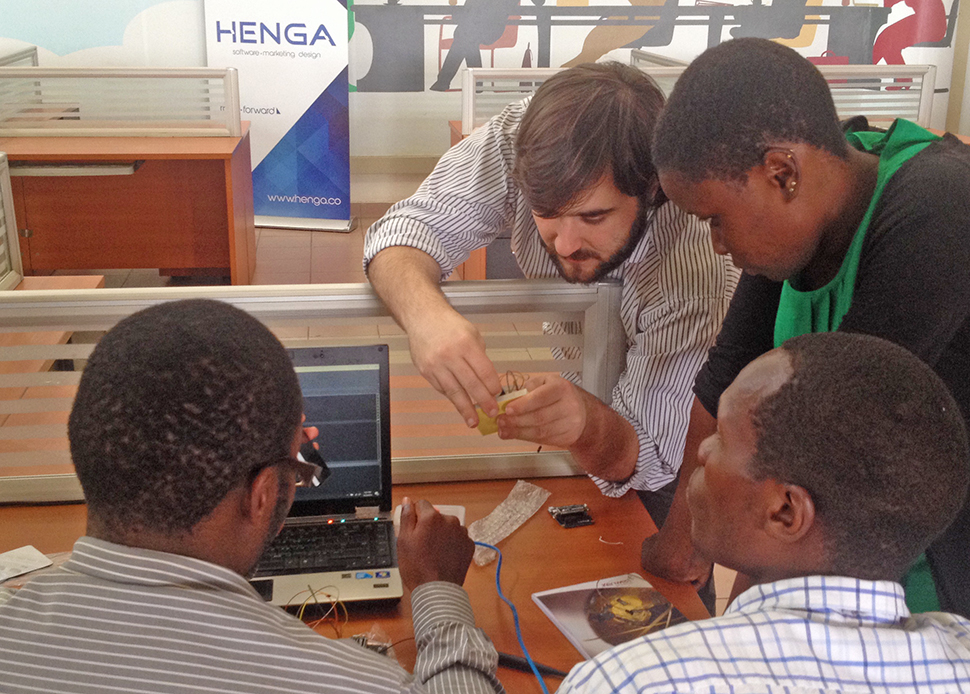 Reflecting on why he came to the workshop, a participant who is a self-employed entrepreneur said,

I have very many ideas. My priority goes to renewable energy ideas, most of which are IoT ideas. Most of my ideas are evolving around IoT.

He especially appreciated the opportunity to experiment with the LoPy, which offers more connectivity for less expense than the modules currently available to him on the Kenyan market. He was among a number of the participants who decided to stay on and develop ideas and prototypes for applications in energy at the energy data hackathon over the weekend.

All in all, the workshop was a great success, giving the participants an oppportunity to discover and experiment with new technology and allowing everyone from participants to organisers to make connections, build relationships and learn from each other. Hopefully this will lead to more in-depth collaborations in the future between Edinburgh and Nairobi. Finally, a big thank-you to Pycom for the generous support that made this event possible!